Port Moody has partnered with StepWin to improve access to energy modelling software to help builders meet Energy Step Code requirements. Builders can receive free access to this software for a limited time. If you have tried the software and have feedback, please contact lsampliner@portmoody.ca. And if you have any questions regarding StepWin, please connect with the software creator directly at arman@lambda.science.

Port Moody is currently offering a rebate, funded by BC Hydro, for mid-construction air tightness tests for Part 9 buildings.

There are two streams for rebate applications:

Want to know if your project is eligible? Check out the City’s Energy Step Code web page under “Incentives” to learn more.

City of Port Moody’s new Development Cost Charges Bylaw is being considered for adoption by City Council on January 14, 2020. If adopted, the bylaw will be in effect immediately. Please note, the City will provide all information relating to the transition and grace period for instream and potential applicants through the City’s website.

Following the proposed changes to the DCC Bylaw, UDI and HAVAN have submitted a joint letter to the Provincial Inspector of Municipalities, with concerns regarding the submission of proposed DCC rates for approval, prior to the completion of a Parkland Acquisition Strategy.

On July 23, the Proposed Development Cost Charges Bylaw received and passed third reading and will now be forwarded to the Province for approval to adopt. See here for the Proposed DCC Bylaw. See here for the report to council. UDI and HAVAN wrote a joint letter for consideration of council on the proposed changes; specifically outlining issues with the Park DCC Program, phasing and waiver application.

On July 16, Port Moody Council deferred the motion presented by Councillor Madsen to reorient the existing Moody Centre TOD Plan towards job creation. The report, prepared by Councillor Madsen entitled, “More than a Bedroom Community!” proposed a new vision for the area around Moody Centre Station anchored by a post-secondary campus and high-tech hub. Following debate, Council decided to defer any further action on this report until the work of a consortium of builders, landowners and TransLink in consultation with City staff is completed.

Port Moody DCC Increases: City staff recently hosted an information session on June 26 that reviewed the recommended DCC increases that are to come into effect on November 4, 2019. See here for the handout and presentation from the session.  The draft DCC Bylaw is scheduled for third reading at the Regular Council Meeting on Tuesday, July 23, 2019. UDI will be writing a joint letter with HAVAN to City Council prior to July 23 to outline outstanding challenges with the increases. If you would like to contribute to the letter, please contact Marissa Chan-Kent.

On July 9, Port Moody Council will be considering a report from staff recommending early adoption of the BC Energy Step Code that will come into effect on September 1, 2019 for rezonings and on January 1, 2020 for all other applications (please see the staff report for the proposed instream protections for applications in process).

The proposed requirements for all other applications are noted below.

The City of Port Moody is updating their DCC Bylaw to reflect the infrastructure requirements of new development. This information session will include an overview of the recommended DCC rates, planned implementation dates, and transition processes. A staff presentation will be followed by a Q&A period.

The first session at 3:30pm is aimed at residential, industrial, institutional and commercial developers, planners, and builders, as well as members of the Urban Development Institute (UDI) and the Homebuilders Association Vancouver (HAVAN). The second session at 6:00 pm includes an educational component and is best suited for the general public and those considering developing small lots.

Following City Council’s recent decision on March 19 to substantially increase the DCC program, UDI and HAVAN staff met with city staff on April 23 to discuss these new rates that were not presented to industry at previous consultation meetings. See here for meeting materials. City staff plan to return to Council on May 14 to deliberate on the extent of waivers and reductions for not-for-profit rental housing, supportive housing, for-profit affordable rental housing, developments that are designed to result in low environmental impact, and small subdivisions designed to result in low greenhouse gas emissions. At this presentation, city staff will also be requesting to hold a Public Information Session on June 12. There will be a dedicated time slot for builders, details will be confirmed following the Council meeting. UDI will be writing a letter to submit to Council prior to May 14. If you are active in Port Moody and would like to be included in the review of the letter, please contact Marissa Chan-Kent.

UPDATED: Port Moody DCC Open House will not be held for April 24

As noted in previous newsletters, Port Moody was planning on holding an Open House to discuss the new DCC rate increases. This Open House was not approved by Council and therefore will not be held on April 24 as previously mentioned. UDI will be meeting with Port Moody city staff in the coming weeks to discuss waiver exemptions and the DCC increases. It is expected that city staff will return to Council on May 14 to provide a report on waiver exemptions and request a formal consultation period for the rate increases, of which UDI will participate once confirmed.  If you have any questions, please contact Marissa Chan-Kent or at 604.661.3033.

As noted in previous newsletters, Port Moody has been reviewing its DCCs since 2016. The consultations with industry have been extensive (please see the October 24, 2016 joint UDI and HAVAN response to the City’s DCC proposal). However, at a March 19, 2019 presentation to Council, City staff outlined a substantial increase in the parks component of the DCC program, so the estimated charges are doubling for some Land Use Designations (which are also changing).

These are the original proposed DCC rates: These are the new proposed rates (and land use categories):

UDI is very concerned about the City dramatically increasing the DCC rates this late in the consultation process with little notice being provided to industry. We note the parks component represents well over 80% of the new rates. The City will be communicating the new DCC rates to industry and the public at an April 24 Open House. UDI will be participating in the Open House and will share further details regarding the event when they are available. If you have any questions, please contact Marissa Chan-Kent at 604.661.3033.

Council Decides NOT to Pursue Rental Only Zoning on Four Properties

UDI is commending Port Moody Mayor and Council for their decision NOT to pursue rental only zoning for 3370 Dewdney Trunk Road, 3131-3137 St. Johns Street, 125 Moray Street, and 1030 Cecile Drive. Council rightly noted during its deliberations, while the use of the B.C. Government’s new rental only tenure on these properties was explored with the best of intentions, further due diligence by Port Moody staff demonstrated that layering this new policy on these properties likely would have resulted in financing complications and unintended consequences. UDI continues to be concerned that this new power may be used by some local governments to arbitrarily downzone properties without compensation and due consideration. We applaud Mayor and Council for taking a cautious approach when considering the use of this new policy tool and we have extended an offer to collaborate on ways to facilitate the creation of new affordable rental homes in Port Moody.

The City of Port Moody has proposed increases to their DCC rates. These proposed changes come after extensive consultation, which began in 2016, at which time UDI submitted a joint feedback letter with GVHBA. Below are the new rates proposed by the City of Port Moody. Included here is a new project list that the DCCs will apply to. City staff anticipate to take the proposed new bylaw to council on December 4 for third reading.

Based on the engineering assessment of infrastructure, DCC rates were determined by generally dividing the net capital infrastructure costs attributed to new development over a 10-year period, by the corresponding number of projected development units (or area) that will be developed in the same time period. The DCC considerations do not apply to the Moody Center and Inlet Centre areas of Port Moody, as Bylaw 2020, 1990 establishes development levies based on the unique servicing and amenity requirements associated with these areas.

See below for proposed DCC rates: 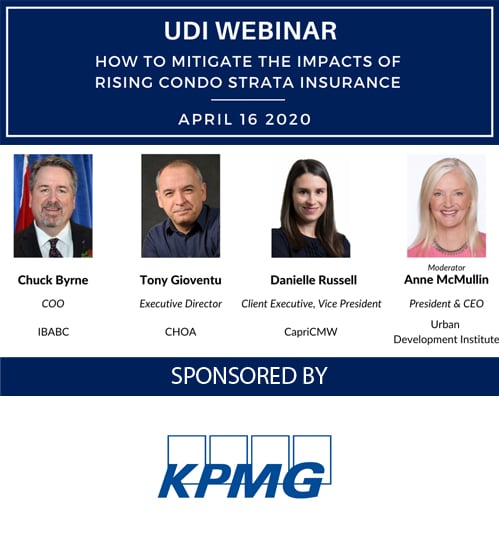 Join us and our expert panel on April 16th to gain more insight and explore the proactive steps our industry... END_OF_DOCUMENT_TOKEN_TO_BE_REPLACED